The Weakness In Me

My recovery from Six Foot has been faster than last year, perhaps because I walked so much of the 19k journey from Pluvi to Caves House. The slow death march did reveal a weakness in my running — poor endurance. I suspect the recent track season and associated lactic-acid-intense running has eroded my aerobic ability. Average heart-rates on the various courses I run are higher than they were when I was following Hadd.
Perversely, the speedwork and racing I did over summer actually made me slower. I'm one of those runners who don't respond well to fewer weekly miles. Especially when an ever increasing percentage of those miles are run anaerobically. My fastest 1500m race last year (5:38) came after 4 weeks of around 95 kilometres (59 miles) per week of mostly aerobic running. The day before that race I ran an easy 17.6k at 5:52 per km for an average heart-rate of 123. If I were to run the same course now at the same pace, my average heart-rate would be a solid grey 129.

Can I run faster for 3000 and 5000 metres? I hope so! My aerobic condition is less than it could be, which means my speed at 5k racing heart-rate (92-93% of max) is too slow. That's one obvious weakness. Another weakness is my lack of speed. I'm naturally slow and always have been — my 20-something PB for 200 metres is a modest 28.7 seconds. If I were to race 200 metres now I'd be around 5 seconds slower. But how much basic speed do I need? Which of my weaknesses should I work on? My 11:39 goal for 3000 metres only requires a pace of 46.6 seconds per 200 metres. Will improving my 200 speed by 3 seconds, say from 34 to 31, make me faster at three and five kilometres, or am I better off going back to a more Hadd-based aerobic programme? I think the latter. So, I'm modifying the programme I outlined in 'The 11:39 Plan'. I'll replace the 1000m intervals with another aerobic run, finishing with some short sprints. Sprints of less than 10 seconds use the alactic system so don't produce lactic acid, which makes them ideal for building strength and speed without damaging aerobic condition. I'll also try and run 100 kilometres per week — perhaps more if possible. If I get bored I'll listen to the Tower Of Robert Song album or tunes like this on my miniature portable music player.
Posted by Ewen at 4:48 pm 31 comments:

It must be the Bellbirds

Saturday, 2:20 pm. At this time a week ago I was commencing the final two kilometre treacherous descent to the most welcoming finish line of any race in Australia. Well, the word race is a misnomer, as Six Foot is an event with no peer. It's an event where a sold-out field of 849 runners tested their endurance against 45 kilometres of the toughest terrain in the Blue Mountains.

Last year I finished with an unexpected PB. This year my 'Plan-A' was to run a similar sort of race, while 'Plan-B' was to make it safely to Caves House inside the 7-hour time limit, thus securing the mysterious and coveted belt buckle for six finishes. I was eight minutes behind PB schedule at the Pluviometer — 26 kilometres down and all the big climbs were over. Just 19 kilometres remained. Once the track along the Black Range became runable I broke into a Cliffy shuffle but as soon as I hit the next small rise I reverted to walking. I was gone. Time for 'Plan-B'. Lots of walking, slow running on the downhills and an eternity of time for thinking...

I wondered about what it is that draws me back to this event. It can't be the satisfaction of putting in a maximal all-the-way effort, for I don't have the endurance and hill running ability to do that. Maybe it's both the familiar and the different things you notice each year — like the soothing cool waters of the three streams after the Alum Creek aid station. Or the distant view of a line of people walking up to Pinnacle Hill. Or chatting to fellow runners before the start and on the dark, cool, damp steps of Nellie's Glen. This year there was enthusiastic ear-piercing screaming from a small cheer-squad on the Deviation which lifted me into a run until I was safely out of sight.

It's not easy to walk, but easy to smile on the day after Six Foot 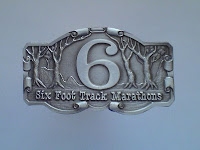 It took six years and 270 kilometres for the buckle
Posted by Ewen at 6:12 pm 32 comments:

I'm touched with nostalgia after stumbling across a fascinating documentary film from 1964. A year from my childhood. I was seven years old and remember all too distinctly the houses, the cars, the simple life, and Mum's cooking. I wasn't a runner, but did lots of running — playing games of hide and seek; chasing; British bulldog; cowboys and indians; backyard cricket and soccer. Like all children, we ran and walked to get places.

The film is about Peter Snell, "a tennis player who tried his luck at running". It's in two parts, and can be seen here. It shows Snell running in the Waiatarua hills, over farmland, up steep bush tracks and through suburban streets. You also get to see some of the races he ran on the grass and cinder tracks of the day. There's footage of some world records, including the 3:54.4 mile he ran on a grass track in Wanganui. In one particular race he finishes a distant third and says "I made up my mind after this disappointment I was going to get right into a build-up of 100 miles a week as soon as possible".

Most runners would know that Snell was a pupil of the legendary New Zealand coach Arthur Lydiard. Although Snell was a middle distance runner, with the one mile his longest race, Lydiard convinced him to follow training methods which included a base-building stage of many weeks of running 100 miles per week. In the documentary it's revealed that the 100 miles per week in seven sessions was supplemented by morning runs of five miles.

My training diary shows I've only missed a little running with my dodgy back. The stretching and strengthening exercises seem to be doing the trick. I'm yet to attempt any hard workouts or races. The ACT Masters' 5000m Championship race is on this coming Thursday. I may not run though, as I'm doing a long run and walk through the Blue Mountains on Saturday morning.

Mum's kitchen looks just like this one from New Zealand!
Posted by Ewen at 8:11 pm 22 comments: