Is a world record is the answer?

The breathtaking first race that opens Distant Runner leaves the reader wondering in open-mouthed amazement what will happen next. What is the secret behind a 5000 metre performance that stunned a knowledgeable Hayward Field crowd? Is it possible for such prodigious talent to burst onto the world stage out the anonymous heartland of America? What is the real story behind Danny Murray, the newly definitive ‘unknown runner’?

We are soon taken on parallel journeys chronicling the lives of athlete and adviser. Danny Murray is the disturbed child prodigy who is on the cusp of graduating from the toughest school of hard knocks. Gabe Seward is the former Olympic Trials runner from the seventies who counsels children from the wrong side of town.

The two meet by chance on a darkened road out of Eugene, Oregon with Seward befriending the guarded, mysterious Murray. What follows is a rollercoaster journey of drama, tragedy and passion not unlike the ups and downs experienced by an Olympic marathon runner. Glikin skilfully draws the reader into the outwardly different yet spiritually similar worlds inhabited by Murray and Seward.

Distant Runner builds with such momentum we anticipate with page-turning speed a dramatic climax. Scripted is an adjective that springs to mind when describing the novel’s structure and street-wise dialogue. In a youthful lifetime we are taken from the vast plains of Kansas to the Douglas-fir shaded mountain trails of New Mexico. From the jasmine perfumed gardens of River Oaks, Houston to the synthetic 400 metre running tracks of Oregon, Dubai and Europe.

This is not just a story about a distance runner and his counsel. It’s a story about characters and life. These characters are expertly drawn so that we care about their lives and fate. We hope for a good outcome but one that remains real. Distant Runner delivers an oxygen-debt laden punch and on the way shows us that runners can’t be simply categorised. They are complicated individuals living real, sometimes tragic but always hopeful lives.

This is novel for all lovers of a great yarn, not just readers who happen to be runners.
Posted by Ewen at 9:41 pm 2 comments:

I achieved two goals yesterday on the rocky slopes of Mount Majura. Goal one was to witness firsthand the stunning potential of Emma Murray. Goal two was to finish the race un-injured and have as much fun as possible on the toughest course I've ever seen.

By strange coincidence Emma's athletic ability is similar to that of Danny Murray, the protagonist in a novel I've just finished reading. I'll tell you more about this book in my next post. In this year's 45km Six Foot Track Marathon I staggered home two and a half hours behind Emma. She smashed the course record running 3:44:05 for eighth outright and since then has joined my athletics club.

The pre-race banter was somewhat subdued as we looked straight ahead at an horrendous near vertical rocky track. The 5 races started together with runners completing either one, two or three laps of the course. One lap climbed 320 metres. The open men ran three laps for a total climb of 920 metres.

After 220 metres of running I switched to walking very early on the slopes of horror hill. There was a dip half way up which I ran, then it was a walk to where Scotty McTaggart was marshalling at the gate. The final climb along the ridge to the summit had some sections where I could run. Very early on this part of the course CoolRunner and eventual race winner Stephen Brown came zooming back down. John Winsbury was clearly in second place followed by a number of fast males and then, Emma, wearing the gold and black of SCT.

I decided (hoped) to get around the course quickly enough to try and see Emma again and also perhaps to avoid being lapped. On my second lap of the course I was not far past Scotty's gate when the phenomenonal Emma came flashing down the mountain appearing to strike firelight from the flint stones every stride. I plodded ever upwards having my own private battle with Carol Baird and a couple of the Albury runners. After the turn I was quite surprised to see Flashduck not far behind. Did she not run a half marathon last weekend with a dodgy ankle!

Near the end of my second lap on the winding downhill single-track section I stepped aside to let CR Steve run past and on to a decisive victory. I faced the daunting prospect of a third climb to the cold blue sky. Most of my running group finished their races after two laps and I thought my destiny was to once again place last. I turned near the top of 'horror' and thankfully saw another lonely runner hiking up the hill.

My plan for the last lap was to maintain my postition by lifting my tiring legs high enough so as to not do a downhill face plant on the rock strewn slopes. I said a final 'thanks' to Martin Fryer who was jumping around trying to stay warm at his windswept outpost. Then, a slow hike up the last single-track hill before the long awaited final 200 metre run to the finish to be greeted by John Harding and Doug Fry.

I've entered the ACT Mountain Running Championships. Having twice run and walked the course at least I have some idea of what I'll be in for next Saturday. I pity the poor visitors when they look straight at the first hill and see a vertical-appearing rough track of dirt and rock. We have to do 3 laps of the bloody thing! Maybe it won't be that bad. At least it's so steep in parts that I have a legitimate excuse for walking. When I ran this event at Mount Coree the whole course was runnable. Not this time.

I've allowed myself to be talked into this event by a young runner from our club who's entered the 2-lap junior race. I don't know why he's doing it -- is not a 3000m steeplechase a painful enough experience?

Miraculously the soreness in my left shin has disappeared. My left hamstring is still bothersome but it's not stopping me from doing long runs. On Saturday I again ran at the Cotter. We started with a fairly large group -- some splitting at Padovan's crossing to run the '18'. Debbie, George and myself ran the '15' (mile). I felt pretty good until the 'Ma and Pa' hill. Back at the Cotter Reserve, my GPS map showed we'd run a distance of 23.9km. The pace felt good (5:34/km) but in the 'old days' we usually ran 5:00/km or faster without too much trouble. Must be getting old.
Posted by Ewen at 6:47 pm 1 comment:

I usually run on the 400m grass track at Calwell once or twice per week. Since the mid-1980's I've always been interested in trying to run faster rather than further. Why would a plodding wombat want to run fast? This is why...

I've been semi-injured with a dodgy hamstring since the Canberra Marathon. I've still been running, but with less volume than I like and taking quite a while to get warmed up on each run. Last Thursday I was down at Calwell and decided to run the last 300m of each repeat that two of our young runners were doing.

I had to run fast (for me) to keep up and averaged a fraction over 60 seconds for each of the five 300m runs. Sprinters probably think this is 'crawling' but for a very average distance runner like myself it felt like I was flying. It's 3:20 per kilometre pace which is much faster than my 5km race pace. I ran fast because it was fun!

On Saturday I ventured out to the Cotter again for a long run. I ran with Carol and Chris on a similar course to the previous Saturday but in reverse and including the summit of Mount McDonald. Here is a GPS profile and map of the run: 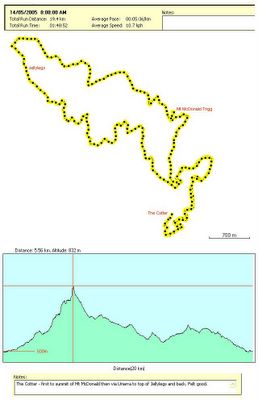 I really enjoyed running on the smooth gravel trails. I was feeling good. Our slowest kilometre was a 7:53 up the mountain and fastest a 4:53 down Jellylegs. At the end of the run my shins were hurting a bit - I think from the downhills.

Today I helped out at the Canberra Half Marathon and afterwards wandered over to The Yacht Club for the first ever Canberra CR Drinks. I could only stay for a while as I had to get out to Fadden Pines to help at my club's schools cross country event. It was great to catch up with some people and bloggers I only knew as 'names' on CoolRunning. Thanks Carolyne for organising this and I hope to see more CoolRunners at the next one!
Posted by Ewen at 6:58 pm 1 comment:

Back to the Cotter

Late in the week I decided to join the Cotter group for a run on Saturday morning. I usually prefer to sleep in on Saturdays and run the ACT Cross Country Club race in the afternoon. I jumped in the car at 7.25am for the 30-minute drive. On the way I caught up to Steve Appleby in his 4WD and followed him.

There was quite a large group and Mick lined us up for a pre-run photograph. We jogged off over the new concrete fire-proof Cotter bridge at 8.10am. The usual shortest option is the 'Cotter 15 mile' (24km) but a number of runners were going to turn back at the top of the Jellylegs hill which would be "about 18k".

Yesterday I ran very gingerly up the first 3km long bitumen hill. We re-grouped at the gate where the dirt road starts. Then we ran pretty much together to the top of Jellylegs (9.6km). The group that I ended up running with included Debbie, Cathy, Carol, Steve, Chris and George.

I hadn't run this part of the Cotter since they felled all the burnt trees after the bush fires. It was quite amazing to run on those same trails that had once been shaded, damp and cool. I recognised the ups, downs, twists and turns of the trail but I couldn't take my eyes off a view that had always been hidden by dense pines.

Now you could look into the distance at rolling hills and see many kilometres away the exposed trail you'd soon be running. The brim-full Cotter Reservoir was in plain view and looking quite strange in a dry, dusty catchment bare of vegetation. You could look ahead and see where 'Jellylegs' went. Previously it was a mystery hill that tilted up and up at each turn.

At the top of Jellylegs, Steve ran on alone to do the 'real Cotter'. The rest of us turned back on the 'wimps way' trail which skirted the burnt-out Uriarra settlement. I was enjoying the run and even put in a bit of an effort on the downhills to keep the free-falling Chris in site. The Garmin showed one of these kilometres as 4:43. On the rare flat sections we were running about 5:10/km pace. My average pace for the 18.6km was 5:27/km.

It had been a run of mixed feelings. I was very pleased my dodgy hamstring didn't complain. It was sad to see the pine forest gone. Then again, it was amazing to run on the now well-graded trails in full sunlight on a brilliant blue-sky day.
Posted by Ewen at 6:47 pm 1 comment: