A fork in the road

In my post The Unforgiving Twenty Minutes, I said I'd be basing my training on the Pete Magill article in Running Times: Solving the 5k Puzzle. I've decided to take a detour for a couple of months before embarking on Pete's training program. My aerobic condition is somewhat less than brilliant, so I'd like to polish that particular weakness first. My idea is to do some running which is fairly similar to the Hadd Training I was undertaking in 2007 — training that preceded a 20:54 5k at Stromlo.

I plan to run a "good" volume of mileage at an intensity which is at or below the 'Maximum Aerobic Heart Rate' as described by Phil Maffetone in this article. For me, this is running at a heart-rate of 130 (or lower) — around 78% of my maximum heart-rate. Over time (hopefully) I'll see an improvement in aerobic condition. My running speed at that heart-rate (and higher heart-rates) will become faster.

At the same time (if it's not too stressful), I'll do a small amount of training to work on my glaring "top-end" speed problem. Things like short/steep hill repeats, 100 metre fast strides, and running drills. I'll also run a few of the ACT Vets' Thursday evening track races — most likely some 3000s and 1500s.

On Thursday evening I raced my first serious 5k since the ACT Championships on 14 January. Finished 2nd-last in 23:54.55. One of the many things I like about track races is that one (usually) receives a finish-time recorded to hundredths of seconds. 19:59.99 is infinitely superior to 20:00.1 — I can say with confidence that there's much work to be done before I'm anywhere near running 19:59.99. My base camp is a long way down the mountain.

The race itself was a little boring. It was a combined 3000/5000, with the majority of runners stopping after 7 1/2 laps. Warming up with Speedygeoff before the race, he told me his goal (achieved) was to run 4:30 kilometre pace. Summoning up the confidence of Scott Brown, I thought 22:30 sounded logically possible. I kept up with Geoff for the first kilometre (4:32 for me), thereafter gradually slowing with splits of 4:40, 4:52 and 4:59. Bronwyn was calling times at the 200 start, so I knew I had to get a move-on if I was to break 24 minutes. Managed to do this with a 4:51 last kilometre.

So, another lesson learned. I'm not only slow in terms of top speed, but I'm also slow aerobically. My heart-rates for the race on Thursday were pretty much the same as for the race in January, which was a little over 2 minutes faster (21:50.7). Maybe a lack of base mileage in recent months is the reason for my glacial 5k speed? My weeks since September have gone: 40, 5, 0, 30, 44, 52, 56, 74, 65 and 82 kilometres. I'd like to run mileage in the 90 to 100k range over the coming months and see if that produces an improvement in aerobic fitness.
Posted by Ewen at 1:54 pm 21 comments:

I ran another session yesterday to check my basic speed — 10 x 100 metres, again with full recoveries, and running pretty much flat-out. These averaged 20.2 seconds, so quicker than the 200s, but still slow. I put this lack of basic speed down to weak fast-twitch muscle fibres. I've been lax in doing fast speedwork in recent times. I should exercise my fast-twitch muscles regularly to improve their strength. I'm wondering how fast you are in terms of basic speed? How fast can you run a session of 100s or 200s? How fast can you run a lap of the track? Do you think it's important to be fast over 200 metres in order to run a fast 5k race? 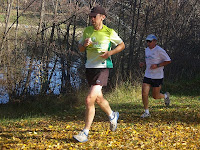