I've reached an age where rational decision making tends to override spontaneous what-the-heckisms. After reading Duncan Larkin's piece in Running Times about the value of long runs for short racers, I decided to head out on Saturday morning for my one over-distance run prior to the Melbourne Half Marathon.

So it was that I arrived at the Cotter Reserve at the crack of dawn on a decidedly bleak and threatening day. I was going to run 15 miles (23.9 Garmin kilometres), over some big hills, in a spectacular location. On a clear day there are panoramic views that hearten the soul — largely the result commercial forestry and the 2003 bushfires. Fifteen years ago "The Cotter" was the perfect location for a summer run — the three courses (15, 18 and 21 miles) being shaded by towering Radiata Pines.

I set off with the impetuous intent of keeping the other (faster) runners in sight. Not an easy task on a course that climbs steadily for the first 20-odd minutes. Dumb idea! I was at close to racing effort, yet the three leaders steadily increased the gap. Steve must have felt some pity, as he waited patiently at the top of the first hill while I breathlessly caught up. "You go on and catch the others," I said. "I know my way, and need to slow down."

Half an hour later I was climbing the aptly named Jellylegs hill, battling into a headwind under steady rain. It was a miserable day. When I reached the gate at the top of the climb I took a drink. I stood there in the cold rain for what must have been a good five minutes, debating with myself about whether to turn right or left. Right was a short-cut home that would reduce the run to about 17 kilometres. Turn left and I'd be committed to the 24. In the end I thought "what the heck", and turned left. Fifteen minutes later I crested the rise on Bullock Paddock Road wondering what I'd done. The wind was biting and there were snow clouds blowing down from the mountains. I was freezing.

I can only remember a couple of times when I've been worried about my safety whilst out running. Once I was jogging beside a quite road towards Crater Lake in Oregon — just me and my thoughts, having a great time until I heard something moving in the forest. Immediately I recalled the stories about joggers being attacked by cougars or black bears. Needless to say I ran with adrenaline inspired urgency for the last 5k back to our lodgings.

What saved me on Saturday was a fortuitous break in the weather. Weak shadows appeared on the ground just after I reached Padovans Crossing. I'd never been so happy to see shadows! I was still cold and wet, but the rain had stopped and I was slowly jogging. At Vanities Crossing my legs were numb and dead from the cold. I was only 7k from home, so I walked the long hill towards Pierce's Creek then jogged the last 2k down to the cars, thinking all the while that this was one run I'd remember for a long time!
Posted by Ewen at 4:47 pm 21 comments:

The Sydney Half and Lloydy

I raced in the Blackmores Sydney Half Marathon yesterday. I was wide-eyed in wonderment at running over a traffic-free Harbour Bridge amongst a crowd of 7,000, and some time later, past the tourists of Circular Quay to finish near the steps of the Sydney Opera House. I had a great time! It was a perfect shining Sydney day.

I kept an eye on the heart-rate monitor in the early stages, just as Canute had done in the Robin Hood Half. I eased the throttle when the heart-rate went over 145. This method seemed to work pretty well, as the first 10k felt comfortable enough. After the turn I picked up the effort, but as I checked each kilometre split, realised that I wasn't producing any extra speed. Maybe it was just a bad hair day? Who knows? Anyway, my chip time was 1:46:10, so a little slower than for the Vets' Half, but on a warmer morning. My result doesn't fill me with confidence that I can run 1:40 in Melbourne in three weeks' time.

At the race expo on Saturday I bumped into Andrew Lloyd. For those who may not know, "Lloydy" ran in one of the most exciting 5000m races ever, when he came from behind to beat John Ngugi in the 1990 Commonwealth Games. I remember watching the race on live television, urging Lloydy on over the last thrilling lap. Steve Moneghetti in commentary was almost as animated as I was — it was a moment I'll never forget. 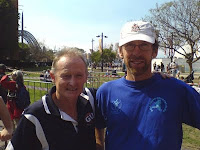 With Andrew Lloyd at the Expo on Saturday
Posted by Ewen at 4:06 pm 19 comments:

Last Saturday dawned with weather perfect for motorcycling. Unfortunately the GSX needs a new rear tyre, so I drove the car to my old hometown of Wagga Wagga. I had planned to race the Canberra Times 10k on Sunday, but my sister was staying with Mum in Wagga, so it was a good opportunity to see them both before Jane's move to Tasmania. Jane had recently returned from an overseas trip where she visited the UK and later caught up with my other sister (now living in Minnesota) in New York City.

Lucho has ten rules of running. Rule #1 is "Family comes first". Rule #2 is "Did you read #1? If not, please read again". So, it was a family weekend. As serendipity would have it, there just happened to be a race in Wagga on Sunday morning — The Lake to Lagoon 9.5k Fun Run. I put in a late entry and ran while Jane and Mum went to church. Running is my church.

I enjoyed the race — well, the first 6k — having made a strategic decision to put my Prefontaine tactics on hold for this one. It was hot. In truth, the temperature was only 26°C, but having spent a Canberra winter running in temperatures south of 10°C, I was psyched out by the unseasonable gloriousness. I'm not a good hot-weather racer. There was also a fresh northerly wind whipping up waves on the normally placid Lake Albert. It was a headwind for much of the race distance.

With the weather conditions in mind, I raced with a little space between the throttle and the floorboards — perhaps starting at half marathon effort. Even so, I didn't have much in reserve for the last flattish 3k beside the river to the downtown finish. I enjoyed dicing with the local runners. There were a couple of small boys — one who surged Pre-like whenever I edged alongside — you've got to love that! There were two grey-haired old blokes, some footy players, and a couple of 20-something girls — one who had a mesmerisingly perfect running style.

My time for the race was 46:05, so not great, but safely home and living to look forward to the next one — which happens to be this coming Sunday in Sydney — The Blackmores Half Marathon. I get to run over the Harbour Bridge — Woo-hoo! I want this race to be a good trial for Melbourne in October, so I'll run as Canute did in the Robin Hood Half — keeping the heart-rate under control for the first 12 to 15k. If the shiny side is still upright for the run back to the Opera House I might bring in a little Pre-work. We'll see! 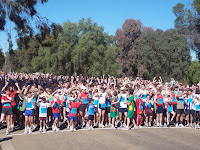 I've been thinking about Canute's comments in my last post where he mentions the central governor theory. Is it possible for me to cajole the pesky governor into allowing a slacker rope, such that I can run with the abandonment of Steve Prefontaine? Speedygeoff also mentions running a Pre-style 70 minute half marathon when he latched onto 2:15 marathoner John Andrews.

Jonathon, in a recent blog post, pointed out Pre's 5000m race in the 1972 Munich Olympics. It shows the final three laps of what is a fascinating race. Pre is leading and has set such a pace that all but four runners have been dropped. When he's finally overtaken, he bursts back into the lead only to be overtaken again. He manages to regain the lead once more, yet loses the bronze medal to a fast finishing Ian Stewart. My take on his thought process is that it goes something like: "bugger you mate, you're not going to lead my race!" I think Pre's accommodating central governor may have cost him a silver medal behind Lasse Virén.

Anyway, I'm never in the running for medals, so I'm open to suggestions for training sessions that might teach my pompous central governor a lesson — just as Gough Whitlam promised in 1975 when he said: "Well may we say God save the Queen, because nothing will save the governor-general!" Thanks Scott for mentioning that apt quote.

For 'Pre practise', I've done one 10k run where I warmed up for 2k, then alternated 'hard' and 'harder' 2k sections. 'Hard' was at about marathon race effort, while 'harder' was at about 10k race effort. This seemed to be a somewhat effective central governor humiliation strategy, as he tried mightily (but failed) to prevent the final 2k 'harder' section. 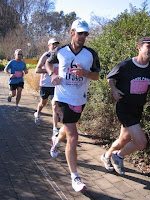 Early in the ACT Veterans' Half Marathon
Posted by Ewen at 9:31 pm 16 comments: