Running for a Sheep Station

I've completed another 4 weeks of Maffetone-style base training — 353 kilometres (a little under 55 miles per week). The pace for my 10k MAF tests (on a good day), is around 5:43 per km, so still some way off the 5:20 goal. On some runs I can detect a weakness in leg-strength, so I've begun running my hillier Rose Cottage course. I plan to introduce some short hill repeats (with long recoveries) and some short sprints (100 - 170m) on the track.

I was a spectator at the Stromlo Running Festival yesterday to watch the Australian Age-Sex Adjusted Cross Country Championships. A number of my running mates were competing in the 7.5k handicap race. The winner was back-marker and marathon silver medallist at the Delhi Commonwealth Games, Michael Shelley. My friends did well — Kathy being the first female to finish, with Liz, Michelle and Geoff not far behind.

It was a bit of a worry to see Kathy get "the staggers" in the last 400 metres, only just making it over the finish line in front of the next (much younger) female. It was a warm and humid morning. I can't do that. Don't know whether my Central Governor is wound up too tight, but I just can't push myself to the extent where I might collapse in a race. I'll stop running first. I think it comes from having done that a few times in my early years of running (particularly in the City to Surf), and giving myself a scare. Since those days my strategy has been to get in better shape than I need to be and race conservatively (my Dad would have said "you're not running for a sheep station"), only pushing the pace in the last couple of kilometres, and only if the weather is runner-friendly. How do you race? For a sheep station, or not? 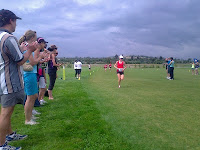 One day I'll add up how many 10,000 metre track races I've run. In this town we have two opportunities per year to race this distance and I like the challenge, so I guess it's somewhere between 15 and 50. A lot of laps of a 400 metre track!

On Thursday evening I ran in the ACT Championship race. Finished 26th in 49:26.0. Not great, but not woeful. Last year I ran the same event in 45:57.54 (at a similar average heart-rate — 153 to 152 this year), so I still have work to do on the aerobic endurance side of things. I'm not one to whine, but I guess the mitigating factors this year were the remains of a head-cold and some longer than usual hours at work.

There was a discussion on the radio last week about Word of the Year, and one that was mentioned during the conversation was "presenteeism" (the opposite of absenteeism). It's when the inconsiderate git working next to me on the railroad gang coughs and sneezes for a week, thereby passing on the gift of his cold. I've been suffering with this gift since last Sunday.

My gradual build-up of ego-free mileage has gone slightly sideways. Weeks of 90 and 94 kilometres have been followed by one of 72. I'll call it whispering sideways, in deference to Lorraine Moller's story in the November 2010 issue of Running Times: Becoming a Body Whisperer. Moller talks about running without a watch or heart-rate monitor and tuning into one's body. I'm still wearing the Polar, but don't feel the need to look at it constantly or check the split of every kilometre.