Joan "O" has stopped writing. Well, she's only stopped writing for us — the readers of her blog. I'm feeling a little melancholy about this, as I enjoy how Joan uses words to convey a love of running.

At Calwell I've always done the longer winter warm-up runs with the kids. In pre-ancient times, I would chat to them during the run (these days I need every breath just to keep them in sight). Sometimes I'd say "What are your goals?", or "Can you see where running might take you in ten year's time?". I remember a couple of the girls replying "I want to run in the Olympics". I said "You have the talent to do that". They really did have the physical talent. Maybe they'll still run in the Olympics. I want to show them (and other young runners with similar goals) something Joan wrote in May 2005 about "doing your best": Pinball Wizard.

Joan started running seriously in 1980. In 1996, at her fourth attempt to make an Olympic team, she was successful. As was her habit in every race, she tried her very best, and on that day third place was enough. She became Joan, "O"lympian. Every race forever after was like a bonus game in pinball.

I sat up late on Sunday night to watch the US Olympic Trials Marathon for women, held in downtown Boston the day before the famous marathon. There was no video, just an intermittent text update of each mile split for the runners. As expected, Deena Kastor won, catching Magdalena Lewy Boulet in the 23rd mile. Blake Russell placed third — two minutes behind, but her best, on that day, was good enough (at her second attempt) to become Blake, "O"lympian. 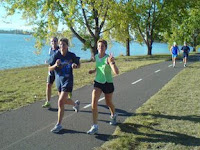 On some days I run with ancient friends. It's still not easy to keep up. They're fast!

Having the right 'tude is important if you wish to run well. Here I emulate CJ while Mark just smiles. [Katy photo]
Posted by Ewen at 3:29 pm 16 comments:

As I drove the Toasts to the airport after the Canberra Marathon, Mark asked "How's the 11:07 for 3k plan going?". "It's not going to be easy", was all I could blurt out, while navigating our circuitous roads and avoiding the worst of Canberra's suicidal P-plate drivers.

There's purportedly nothing new in distance running training. I'll call my plan Hadd for Ancients, which I hope is something which will work for me. In a recent post, I wrote about being shocked at losing my sprint speed whilst doing Hadd-training. For those that don't know, Hadd is similar to the base phase of Lydiard training, but using heart-rates to guide the effort on any particular run.

Why Hadd for Ancients? Because as we become ancient (for argument, over 40, although I know teenagers who regard 25 as ancient), we lose sprinting speed. However, if we regularly practise sprinting, we can limit this loss. For the next six to eight weeks I'll run aerobic Lydiard-style base training; similar to what I did in the second half of last year, but with a few modifications. Once per week, after one of my steady runs, I'll do some barefoot 100 to 150 metre sprints on the grass track at Calwell — not flat out, but running relaxed and fast, with full recoveries between sprints. I'm also going to do a short race (about 3k), every two weeks. The other significant modification is to run more of my aerobic runs at Hadd's "upper aerobic" heart-rates — 80 to 85% of maximum (HR 133 to 141 for me), sometimes a little higher, but trying to stay under my lactate threshold. I think these faster runs will be beneficial because the mechanics of running movement at 5 minutes per kilometre pace (8:03 miles), is not dissimilar the mechanics of running at my 5k race goal pace of 4:00 per kilometre (6:26 miles).

After this six to eight weeks, I'll reduce the weekly volume, and start running one or two anaerobic interval sessions per week. More on that later. I hope everyone is having a great weekend — especially those like Jen, who are lucky enough to be running the Boston Marathon. Go Jen! 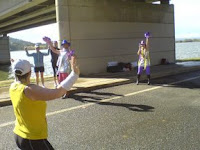 Under the bridge - Toasts and geese cheer on a marathoner in Canberra. 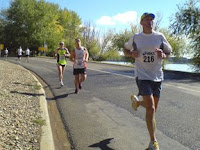 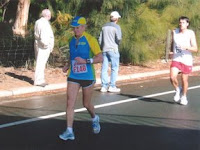 She ran out of sight

The Canberra Marathon is on this Sunday. I'm not racing! Not that I was ever talented enough to race a marathon. The marathons I've run have always been a test of endurance. How long could I endure?

Canberra was where I ran my first marathon in 1981 — 3:41:14. This Sunday I'll be joining some friends to watch the excitement unfold by running to various places on the loopy course. Other friends from near and far are running the marathon (or making a spectacle of themselves by dressing up in strange outfits and cheering).

I'm particularly interested in one competitor, 'Luckylegs', who is running yet another marathon at the remarkable age of "three score and sweet eighteen". On Sunday I expect her to run out of sight... not on a dark night, but on a sparkling Autumn morning. I've been coaching Norma for three years, and the 2008 Canberra Marathon will be our last as a team. Yes, I've been sacked! I suspect she's decided to hire a better looking coach, such as Bob.

I hope you all have an enjoyable weekend. For us in Canberra, I have a feeling it's going to be a goof one! 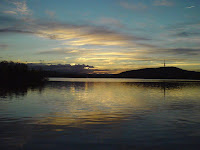