It wasn't an M50 PB, or even under 22 minutes, but I'm pretty happy with how I ran in the ACT Veterans' 5000m Championship race this past Thursday evening. I finished 22nd (out of 26) in 22:14. No 1/100ths of seconds to be seen in the results so the photo-finish timing equipment must have chucked a wobbly.

I only had time for a 1k warm-up jog but ran quite a few 80 metre strides (with the legs feeling good) so started in a positive frame of mind. Unusually for this track season, the weather was favourable — calm and about 16 Celsius. I positioned myself towards the outside of the curved line and after the gun, fell in behind Amanda. There was a good pack just ahead being led by Roger and Dale, with Rob, Helen and Kathy in close company. The clock at the finish line read 49 seconds as I ran past. That's a tad quick!

On the next lap Amanda slowed slightly so I had the choice of staying back or moving ahead (which I did) to trail Kathy. My legs felt good, but I could tell the pace was a bit on the ambitious side. Passed 1000 metres in 4:08. Too fast! That was the fastest kilometre I'd run since a 1500m race back in November (must have split about 4:09 then). I hadn't run the 1k intervals that Canute suggested (due to a niggly hamstring). The elastic between myself and Kathy snapped before 2k (8:33) so I ran the rest of the race in no-man's-land, hoping to limit the damage from the quick start and stay ahead of Amanda. My 3k split was 13:06. I drifted more after that, running 4:38 for the 4th kilometre before speeding up slightly in the last lap trying to get as close to 22 minutes as I could.

I'm excited about this race because I know there are areas where I can improve. 45 seconds isn't that far away from my M50 PB — interval training must surely be worth 30 seconds off a 5k time? Even so, for the time being I plan to continue with good paced and 'springy' aerobic running (along with regular short races during the cross country season). This morning I enjoyed such a run — 15k around the West Basin of Lake Burley Griffin. It was a perfect day. Rowing sculls were gliding over the calm water; cyclists were zipping along; walkers and runners were enjoying the missing precipitation. 15k in just under 81 minutes — a good run.

Most runners would have read about the '180 steps' theory of good running. Apparently a running cadence of 180 steps per minute is close to ideal (taking into consideration variations for height — short runners are going to have a naturally faster cadence). I've always been self-conscious about my slow loping cadence, especially after being a spectator at recent track meets and viewing the very fast cadence of some runners. Jeff (a low 18-minute 5k runner) has a cadence of around 214 steps per minute during a 3k race.

I decided to time my cadence to see what it actually was. The easy way to do this (should you wish to try), is to carry a stop-watch and press start as one foot contacts the ground; then count ten contacts of that foot and stop the watch on the tenth. This gives you a time for twenty steps. Using a calculator you can later work out your cadence: 60 (seconds) / T (time for 10 steps) x 20 = cadence. For example, if your time for 10 contacts of the right foot is 6.66 seconds then 60 / 6.66 * 20 = 180.18 — the 'magical' cadence of 180. My timings averaged out at around 6.95 seconds which works out to be a very loping cadence of 172.66 steps per minute. When I consciously tried to speed up my turnover I recorded 6.80 seconds (a cadence of 176.47).

Thanks to the people who made suggestions on how I could improve a training week. The two weeks since then have turned out to be weeks of 78 and 79 kilometres, doing more or less aerobic running at efforts varying from easy to just below aerobic threshold. There was one 5k race on the 28th of February in which I paced myself to finish ahead of my long-time rivals Charlie and Jim. I caught Jim early (he was having a bad day), ran with Carol for a while (she broke 2:50 at the London Marathon in the 'old days'), then edged up to Charlie at the 4k mark. I could sense he was at his limit so I ran the last kilometre strongly, finishing in 23:41.

I've been enjoying running these Tuesday evening races with something in reserve. Recovery is therefore fast — I can do a normal run the following day — and I feel like this level of effort is building up my training and racing fitness. My next 'all-out' race will be on the 29th of March at the ACT Vets' 5000m Championships. I'd like to break 22 minutes in that race and go as close as possible to my M50 PB of 21:29.58. I'll do some sharpening interval work of the type suggested by Canute (5 x 1k with short recoveries) before then.

One thing that's helping to elevate my confidence are the numbers I've recorded for a few recent training sessions. Numbers that take me back to 2008 — the year of my M50 3000 and 5000 metre PBs. At that time I was running my Tharwa Drive Bridge 8k course at around 700 heart-beats per kilometre. For example, on the 6th of February I ran 42:31 at 691 heart-beats per km and on the 13th of February 41:07 at 694 heart-beats per km. On Friday just past I ran an easy 45:58 (ave heart rate of 122) for 701 heart-beats per km. So that's a good number, especially considering that faster running is more 'efficient' (there's better elastic recoil of the muscles/tendons when running fast). I recorded another good number during yesterday's long run with the Speedygeese. I ran 15k at 5:33 per km (716 heart-beats per km) in which the 12th kilometre was covered in 5:00 at an AHR of 139 (695 heart-beats per km).

The final good number (or silly and inconsequential number depending on your viewpoint), is that today marked my 100th consecutive day of running. Yes, a running streak that started on December 3 last year. I'm not sure when it will end, but thus far I'm feeling fine! 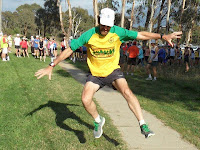