A rare half marathon and a cross country win

For the week following Nail Can I ran a mostly easy 69 km then 81 km including a quickish Customs' 5k in 24:32 (a slower course than the Tuggers Parkrun). In a last minute decision I entered the YCRC Canberra Half Marathon as many friends were running and I thought it a good way to get in my weekly long run. My last road half marathon was at the Gold Coast in July 2014 (1:56) and I had a rough goal of improving on that time.

The race went quite well for the first 10k, with 5-minute kilometres not feeling overly difficult. On the run down the steep hill near the Governor General's side yard my left calf started tightening up and I had visions of a DNF (at worst) or a slow jog/walk to the finish (at best). Easing off the pressure just a fraction worked a miracle and I was able to run to the finish at a slightly reduced pace. I finished 138th in 1:50:16 with 5k splits of 25:08, 25:13, 27:15, 26:26 and 6:18 for the last k and a bit. I was pretty happy with that result and ran in recovery mode Monday to Friday of the next week.

On Saturday 3 June I raced the 8k event for Masters at the ACT Cross Country Championships. I ran well! Stayed with Roger early then drifted ahead but couldn't catch any other runners, finishing 11th in 39:25. As a bonus, I was the first M60 (in a field of one!) so was presented with a gold medal for my efforts. The small number of entrants across all races was disappointing. The Open Men's race had less than a dozen finishers. Way back in 1989 I was buried deep in the field, finishing 58th for the 12k in 47:51. Is running less competitive now or are people happy enough doing the Parkruns? 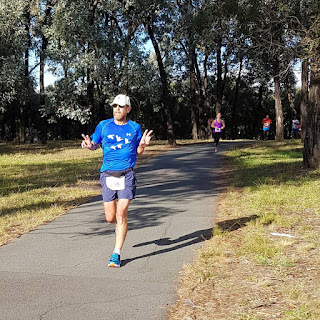 Flying (sort of) with 7k to run in the Canberra Half

All the medal winners in the ACT Masters' XC Championships