Last Saturday I ran in a 5k race on the scenic bike-paths adjacent to Lake Burley Griffin. My time was 21:46. I had a good race, even if the weather was less than desirable. A chilling westerly, which I'd have been rapturous about in my old sailing days, turned my final 2k into a Michael Jacksonesque moon-walk.

I've been pondering where this result leaves a naturally ponderous athlete when it comes to a lofty goal of running 11:07 for 3000 metres. My 5k was 48 seconds faster than for the same race last year. A mere 3.5% improvement. Am I optimistic in believing I'll be 3.5% faster when the summer T&F season rolls around in October? If I can be this much speedier I'd be rewarded with an 11:33 — leaving me lactate-legged and panting, over 100 metres behind the runner who's face expresses the immediate relaxation of sheer relief upon looking left at the Seiko and seeing 11:07 click over.

I'm in for a long hard winter. As I train through wind-swept afternoons, I'll take great inspiration from a movie not yet in production. "Far out in Fargo" is the story of an ice-encrusted runner who staggers in from the frozen plains of North Dakota, slashes 6 minutes from his PB to win a famous marathon in 2hrs 30mins 34secs — in doing so, he leaves a highly ranked Kenyan sitting in the gutter, dumbfounded and head-shaking in disbelief. 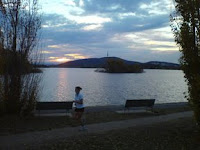 Lake Burley Griffin sunset from near the Carillon. I like the coolness of this photo and the mystery of the unknown runner.
Posted by Ewen at 10:47 pm 20 comments:

Last Sunday I went on a day trip to Albury. My mate Jim was driving — we left Canberra at 3am! The purpose of our foolishness was to do the Nail Can Hill Run. I ran this race last year; and the year before that. It's becoming a habit. I'm not sure why. Nail Can is an 11.3km race with a thumping big hill! I'm no mountain goat. Give me the flatness of a 400 metre Mondo track any day.

It was foggy and cold as I shivered with a record field of 1500-plus starters. I carried my trusty Sony phone camera, thinking I'd take some photos to show you what you're missing. As I raced towards "the hill", I thought of two Kates. One Kate we've nicknamed KFC — after her initials. Kate's parents named her before Kentucky Fried Chicken became KFC. She's a very talented runner. The other Kate, I first saw on Countdown. I sang a tune of hers in my head as I plodded up "the hill", pausing occasionally to take photos...
Say if I only could,
I'd make a deal with God,
And I'd get him to swap our places,
Be running up that road,
Be running up that hill,
With no problems...
Singing along with Kate worked. As "the hill" flattened out, I started to run, and realised my pace was good. I was having fun running fast, just like KFC used to; so there were no more stops for photos. I raced down to the finish, very pleased to record my best time since 1981 — 56:53. My mate Jim ran 54:11 — watch out next year! One runner I'd loved to have swapped places with is my training partner from Calwell — Kathy was the third female, and broke the 50+ record running 48.34! 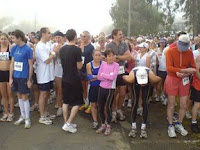 A tad brisk before the start. Kathy (in pink) finished third 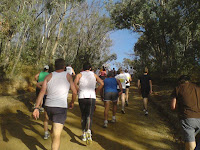 First part of the hill 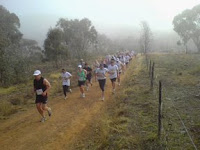 Runners appeared out of the fog 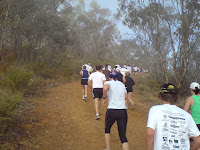 It was a long hill! 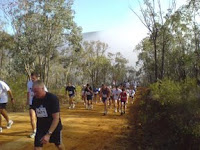 Nearing the top of the climb 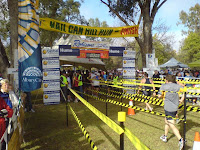 The finish line was a welcome sight
Posted by Ewen at 9:53 pm 23 comments: