My second race in what I hope will be an endless summer of racing was run on Thursday 20 October. It was a 5000 metre track race organised by the ACT Veterans, once again held in conjunction with a 3000 metre event. These 'combined' races are a strange experience if one is racing the longer distance. The 3000 is the popular race (27 runners verses 5 in the 5000 on this day). What's strange about them is that I'm running 'with' a group of people (Ken, Emma, Heath and Janene for example), when they abruptly start kicking down the pace on their last lap while I still have 'six to go'. Then when I have 'five to go', the track looks like the aftermath of the Gunfight at the O.K. Corral — sparsely populated by people, just when I need them to compete with to the finish.

Needless to say, my concentration waned somewhat in those last five laps. Especially as I knew by my 3k split that I was racing towards an 'average' finish time. I ran 22:40.02. I was hoping to run at least '21-something', even though McMillan predicted 22:38 from my result in the previous week's 3000. Anyway, I'm confident about running in the 21s before long. Under 21 and my dream goal of breaking 20 for 5k could take a while. But I'm not going to stop trying!

I like the electronic timing that one usually gets with track racing here in Canberra. I raced a 3k on Thursday night, finishing 5th in 12:59.91. On the road that would have been 13:00 — 12-something, even though no faster, looks and sounds better. Just as 29:59 for a road 10k would have looked better for the 46-year-old Steve Moneghetti, had he run that in Launceston instead of the equally incredible 30:00 he recorded back in 2009. As is the rule with all road-race times, his 'sub-30' was rounded up to the next whole second.

I think I'm at a good place to start the summer season. Average heart-rate for the race was 148 and I can usually average 153 - 155 for a 3000. I'm one of those runners who tends to improve with regular racing and I'd only completed two sessions of intervals in the lead-up to the 3000. I raced the Melbourne 10k last Sunday in 47:16 and didn't feel fully recovered from that effort by Thursday. Although Melbourne was more of a holiday than a serious 10k race I ran hard! One consequence of a moderate mileage programme is that the 10k seems like a very long race (at least mentally). While in 'beautiful one day, perfect the next' Melbourne I enjoyed cheering on friends in the marathon and half, as well as a relaxed post-race lunch and coffee at the Observatory Cafe. 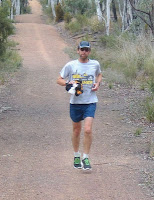 Jim White took this photo of me warming up for a Vets' Handicap race. The trail is less than a kilometre from the AIS 400m track - perfect for an easy warm-up jog.
Posted by Ewen at 8:31 pm 16 comments:

I've had one low-key race since The Canberra Times 10k — a 4k handicap organised by the ACT Vets. I ran 18:56 on the not-so-easy course, made harder by an overly fast start. Regular weekly track racing commences on Thursday week and I intend to race events from the 800 to the 5000 metres. Can't wait!

My training will be geared towards racing a good 5000 (and road 5k). With that in mind I'm dropping the long runs from my training programme. I have a tendency to plod and shuffle on runs much longer than 60 minutes. Running with that technique doesn't help my goal of developing springy muscles and a springy stride. Very long runs (2 hours or more) just make me tired! I think replacing the traditional weekly long run with another speedy session will help my 5k goal.

I don't think I'll lose much in the way of aerobic endurance by running 'low' mileage. The 46:25 10k was preceded by 12 weeks averaging 58k (36 miles) per week. For the 2008 version of the same race (46:44) my average weekly mileage was 81k (50 miles) for the 12 weeks. So I'm relaxed about a low volume summer. I haven't decided what a typical training week would look like. Perhaps something like: Thursday race, Friday 10k, Saturday 10k, Sunday long intervals, Monday 10k, Tuesday short intevals/hills, Wednesday 10k. A rest day out of that when I feel I need one. The 10k runs would be at MAF heart-rate.

I was happy to see 37-year-old Paula Radcliffe (a runner who has a particularly springy stride) run a good marathon at Berlin recently (2:23:46), coincidentally on the same day that Patrick Makau ran an astonishing 2:03:38 to break the great Haile Gebrselassie's world record. There's a video of Paula racing to win the 2008 New York Marathon which brilliantly shows her springy stride breaking away from the flat-striding Ludmila Petrova at 22 miles. I'd love to run like Paula. Just a little.
Posted by Ewen at 9:19 pm 26 comments: