Many elite runners swear by black and white training, so why wouldn't a 'cut-down' version of this work for the average weekend warrior? I think the answer lies in the theory that regular lactic acid production (over time) somehow erodes aerobic fitness. There's a lot of anecdotal evidence of this — one famous 13-page thread on Letsrun.com had many examples of runners who were successful because they didn't do anaerobic interval training. Bob Hodge (2:12 marathoner) said "Most folk's never approach the pinnacle of consistent running that they can handle, therefore the intervals become 'premature withdrawals' from the bank of mileage base they try to build." Other runners reported early season PBs after a winter of steady base-building, then becoming excited and introducing interval training (to further improve their speed), only to have performances paradoxically tail off over the racing season.

I think we hobby joggers need to remember that elite distance runners are typically doing a LOT of aerobic running. Those on mixed running programmes of the type popularised by Pat Clohessy and Chris Wardlaw are running upwards of 160 kilometres per week. Less than 5% of this mileage would be lactic acid producing anaerobic running. I have a theory that the large amount of aerobic running they do is sufficient support to ward off any erosion of aerobic fitness. A 'cut down' version of this mixed training would have me doing less than 3k of interval-type training each week. Even so, would the other 57k of aerobic running be sufficient support for this breathless pain? More to the point, if all my weekly running was aerobic, as it is now (with some very short sprints and drills), would my improved fitness produce faster racing? Distance races of 5k or more, after all, are mostly reliant on aerobic energy. I found another page that takes the view that traditional 'hard/easy' training is not the best method — Re-Thinking The Hard-Easy Myth, which promotes the idea that regular repeatable daily running is the best way to develop an athlete's oxygen uptake. Pretty much Maffetone heart-rate training, but running by feel. Heart-rate monitors would come in handy to stop these kids from turning some workouts into races! In the Letsrun thread I mentioned earlier, 'dwayne pipe' recalled seeing the Lasse Viren documentary 'Running is Your Life' (on Youtube in Finnish!), in which Viren ran much of his 200 miles per week "with a heart rate in the 120's, very very slow, and he would run progressively slower if his rate continued to rise." A predecessor of Maffetone? 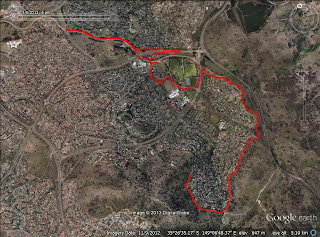 10k trail ends at the grass track for short sprints on grass
Posted by Ewen at 11:15 am 13 comments:

Taking a look at Maffetone Training

I'm not long home from cheering on runners in the Canberra Marathon / Half / 50k races. Yesterday I raced in the feature event of the weekend — the Adidas 5k Fun Run. I had a good race! Ran strongly all the way, enjoyed some one-on-one racing with various people (mainly youngsters), caught a fast-starting Janene inside the last kilometre and recorded a respectable time — 22:46. One memorable duel was with an 8-year-old girl in pink. Caught her with about 500m to run, settled for a bit then threw in a strong surge. Thought she'd been despatched but then she came flying past with an impressive kick over the last 100 metres. All good fun!

My sister gave me a Kindle for Christmas and I've downloaded a few books, the latest being 'The Big Book of Endurance Training and Racing' by Dr. Philip Maffetone. I was impressed by Mark Cucuzzella's enthusiastic review on Amazon, summing up the book as 'The best holistic approach to endurance for life.' Mark follows Maffetone's training methods and has an impressive list of running achievements, including winning the Air Force Marathon in 2:38 at the age of 44.

I've only read 7% of the book (according to Kindle) but I'm enjoying it and think it'll serve as a good reference to guide my training. Phil Maffetone is well known for using heart-rate monitors to coach athletes. What I didn't know about is the emphasis he places on the 'holistic approach' to training. Running needs to fit into one's life in a balanced way. Stressful work and home time plus stressful training (hard interval sessions and high mileage for example) doesn't produce successful racing. The Maffetone heart-rate 'zone' is the 'fat-burning' zone and running in it is usually relaxing and not stressful. My MAF (maximum aerobic function) heart rate is calculated to be 130 (180 - my age of 55 + 5 for running history) and by feel I can tell that 130 is a good number for me. Phil Maffetone recommends that as much running as possible be done in a 10 heart-beat range up to MAF heart-rate, so my range is 120 to 130. This quite suits my 'run by feel' philosophy — 130 on flat ground equates to a pace (at the moment) of about 5:30 per kilometre. As my aerobic condition improves, my pace at HR 130 will get faster. I can run well by feel on a day to day basis too — if I've had a stressful day at work I'll do a shorter run, closer to 120 HR; if I feel good and fresh, I can run longer and/or faster and/or over a hillier course. I have a 12k 'rolling hills' trail course which seems to be ideal for building leg strength. Anyway, I'll expand on my thoughts once I've finished the book and with a few months of training in the diary. 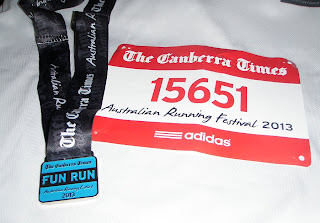 My palindromic number for the Adidas 5k