Desperate measures at the City to Surf

I raced my 29th Sydney City to Surf on 11 August. My goal was to break 70 minutes — the time required to start in the 'Red' first group of about 9,000 runners. My training indicated I could do this, especially after my good race at Dunrossil Drive. I decided beforehand to run using effort as a guide (usually the best method on such an undulating course) and hope that would produce sufficient speed. From previous experience (especially last year's race), I knew the split times I'd need at 5, 7 and 10k in order to break 70. I could be 50:30 at 10k.

Race morning was sunny and calm — perfect I thought, until I started to warm up. I was sweating! Training in a Canberra winter doesn't prepare one well for a warm Sydney day. I started in my usual spot on the left side of William Street, about half way back in the 'Red' group. I only took about 40 seconds to reach the start mats, then it was the usual scary rush, trying to avoid zig-zagging runners up to the Kings Cross tunnel. The crowd never thins out in the City to Surf (unless you're running 3:45 ks or better). By the other side of Edgecliffe (3k) I was no longer worried about getting carved up by anxious speedsters. Running along the flat section approaching 5k I was feeling okay (if warm) and moving well. Glanced at my watch and saw 24:22. A little slow! Didn't panic though as I was maintaining position and continued to do so on the run up Heartbreak Hill. The clock at 7k was showing high 35s (which I thought to be on schedule as the second half of C2S is at least a minute quicker than the first).

Along Old South Head Rd and into Military Road I was feeling the strain, but still moving with the crowd — keeping an eye on unusual runners: Spiderman, a young girl in Little A's uniform, grey-haired blokes and ladies in tights (way over-dressed). 10k was passed in 50:28 — hmm, should be able to run 19 for the last 4k, with the 13th being downhill. I was starting to tire, so used the downs to recover, saving something for the last kilometre. Got a bit of a shock at 13, with the watch showing 64:46. Geez, 5 minutes to get to the finish and it's a long drag along Campbell Parade! I increased the effort, tried to follow people who were moving fast and avoid those who were slowing. Not easy! Finally around the U-turn, space opened a bit left side near the crowd and I sprinted for all I was worth. Under the clock, stopped the Garmin and saw 69:45. Yes! That was close — I hate having to sprint like that! Official time was 69:39 for 7,908th place.

This year's City to Surf was one of my most satisfying. Back in May when I had the DVT problem I wondered if I'd make the start this year, let alone break 70 and maintain that Red-group status. Interestingly, my average heart-rate for this year was the same as last (144). I ran 67:54 last year on a much cooler day and wearing the lighter Kinvaras. This year I was training with a slight achilles niggle so wore the Brooks Racer STs as they have a more substantial heel. I've pulled up well from the race and actually ran (not raced) a trail half marathon in Wagga Wagga on Sunday — 2:00:16 on one of the best trail courses I've ever run. I'll tell you about it next post... 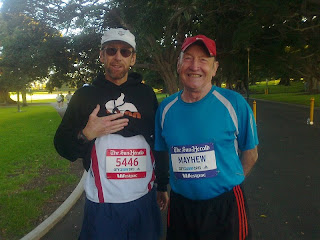 I had a good race yesterday — the Dunrossil Drive 4.2k cross country event (one of the rare local courses which dates back to the '80s). On a sunny day (cool headwind for the 200 metres prior to the far turn), I finished 16th in 18:48. That's an average of 4:29 per kilometre for a course that has its fair share of soft going, exposed tree roots, turns and undulations. There were 31 finishers.

I wore the Saucony Kinvaras for this race and was pretty psyched up to run hard after a poor result last Saturday (49:53 for 10k on a flat road course). My warm-up was a 2k jog followed by a good number of strides on the gentle grass downhill near the start. After 300 metres or so I found myself in a group of runners I knew well: Hugh (48 sec 400m in the day, fast finisher!), Charlie (first 30 Canberra Times 10k races under 40 minutes), Brian (barefoot runner and 75-minute half in the old days), Jim (broke 40 for 10k once) and Thommo (closing in on 20 for 5k as a 50-54 runner). Robbie was about 40 metres ahead of our group.

Jim was setting the pace down the first hill and it took a while before Brian and I drew abreast. Thommo pushed on and made a gap of 10 metres,  then Brian loosely covered this move. I followed these two around the far turn near the Governor General's front gate. On the run back up to the hill I caught Brian and ran with him as Thommo pulled us both towards Robbie. Soon after, Brian dropped off my shoulder — I could see Thommo was gaining on Robbie, so I tried to keep the ocky-strap from stretching too far. Just prior to the half-way turn we passed Robbie. For the second half of the race I ran hard, in fear of being caught by Brian or Charlie. I knew I was slowing as Thommo gradually pulled away (my lap splits were 9:18 and 9:30). He finished 13 seconds ahead.

Although it was a cross country race, I think this course relates well to a flat 5k. Back in 1989 I ran 15:05 as a 32-year-old and was racing track 5000s in just under 18 minutes. Adding 18-19% to a Dunrossil Drive time would appear to show 5k flat potential. If so, I'm pretty happy to be in 22:11 to 22:22 form for 5k right now. The MAF training is working. One rather sad thing about yesterday's race was how few runners were competing in what was once a premier event on the calendar. In 1989 I was 63rd in a field of 195. Where are all the runners these days? 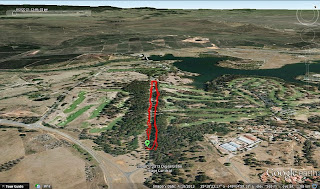 Dunrossil Drive cross country starts near the 'green balloon' and runs on the southern side of the drive towards the Governor General's residence. Two laps. Scrivener Dam and the National Arboretum in the background.
Posted by Ewen at 10:09 am 23 comments: