A week after the City to Surf I drove down to Wagga for a small family gathering. As luck would have it, the Wagga Wagga Trail Half Marathon was being held on the Sunday so I entered with the thought of using the race as my weekly long run. This turned out to be one of my best ideas ever! What a fantastic race. Loved it!

In my early running days (1980s) I ran during the week with a small Sydney group in the Lane Cove River Park. On Tuesdays we ran the road, out and back to the top gate from Fullers Bridge. Friday afternoons in summer we'd run 'both sides of the river' using an old timber footbridge to cross it at the northern end of the park. The trail was mostly single-tracks, broken by occasional grassy picnic areas (BBQ smells in the air as we ran past, with calls of "want a beer or snag?" from friendly locals). Al would manoeuvre himself to lead on the narrow rocky section, slowing things down before Steve would push ahead down by the river. Jenny would then scamper ahead over the sandstone outcrops. After an hour or so we were back at the bottom carpark. It was fun running!

The course at Wagga (from 4.5k to 9k) brought back vivid memories of Lane Cove. We were on well formed single-track mountain bike trails, zig-zagging through the woodland, up and down gullies, along contour banks, having a great time. All the runners were courteous, stepping aside momentarily to let us overtake (if we were faster). I was generally catching people and eventually fell in behind a group of two ladies and one bloke who encouraged each other along the tricky course. I followed them over the top of the hill, down along the edge of the golf course to the flat dirt roads on the outskirts of town. My steady pace took me ahead of this group (the bloke came flying back past at 17k) and up to other single runners. I was enjoying the flatter going, which at 13k switched from roads back to single-tracks beside the river. There were about five fence stiles to negotiate and one memorable section of soft sand (thankfully only 100 metres or so). My Hoka Bondis were performing brilliantly — legs were feeling good! I can only recall being passed by one runner in the last 5k — a young woman in black who said from behind "sorry, I'm a slow overtaker."

The half marathon distance is a slight stretch for me (especially on a hilly trail course), so I was happy to be back near the familiar part of the river, not far from the finish at the Wagga Beach. I heard a cheery "Go Ewen!" from Speedygoose Sarah-Jayne, who'd won the half in an incredible 1:32:38 (8th overall) as I 'sprinted' up the final bank to the finish arch. My time was 2:00:16 for 50th place in the field of 120. I'll be back next year for sure — see you there! 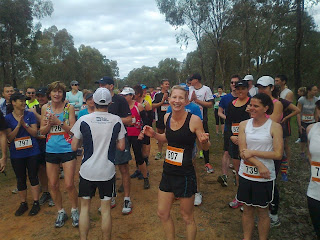 Sarah-Jayne: all smiles before the start 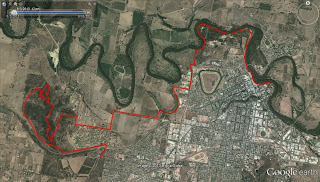 Half course is the second half of the marathon. Start bottom left, finish top right. My friend Rachel's full marathon report is a good read. 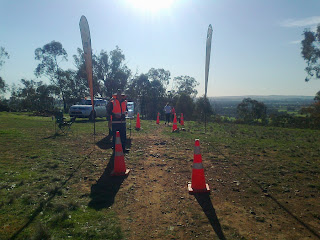 Top of the hill, with most of the single-track running nearly over. What a beautiful day!

The Wagga Wagga ‘bush half’ sounds absolutely delightful. And your time for a fairly relaxed run over tricky terrain was great.

That sounds like excellent fun - a great way to enjoy a long trail run! Well done! :)

The course look brilliant, that's for sure. Makes me wish we had something like that over here.

You're lucky to be able to jump into races like that on the spur of the moment. Never happen in Japan - every race fills up months ahead.

Wish I had a Wagga Wagga finishers T-shirt. Have to say trail racing is my favourite form of racing!

Canute, 'delightful' is a perfect description.

Thanks Ruth. You'll have to give the Vets Half a miss next year and run!

Thomas, you would have loved it. The marathon course was more of the same, although Rachel (2nd) described it as 'brutal' (but she's a road runner!).

Fiona, don't tell anyone - wouldn't like it to become as big as Blackmores ;-)

Bob, I entered a couple of weeks prior. Think you could still enter in the last week. The race could cope with a few hundred more but don't tell all your Japanese friends ;-)

The day looked perfect, capped off with 'beer and snags' to finish?

It was Mark. Ah, no - scones with jam and cream. Mmmm!

Thanks J. You have 11 months to go from couch to trail half marathon ;-)

Good run Ewen. Was wondering if that trail marathon was just off road ie- dirt forest roads or single track scrub. But you just confirmed it.

Paul, the full course has a couple of extra hills (runnable) and a little bike path running in the early stages. If there had been flooding they'd use an alternative course.

Sounds like the Wagga 1/2 marathon and the Dubbo 1/2 marathon have lots in common. I plan to do more of the country/regional events in the future. They are so much more authentic - ie, runner focussed - than the big commercial operations which seem to have taken over all the capital city events.

That's a great idea...half marathon as a training run. Sounded like a fun run, on trails and a great day. Pretty perfect.

Looks good Ewen. I know that area well too.

Liz, totally agree with that. We have to be careful though, not to promote the country events too much - thousands of people running Wagga or Dubbo would detract from the small-town feel.

NY Wolve, doing it that way helped with the nerves too. I wasn't anxious starting near the back.

Scott, don't tell anyone ;-) You would have gone close to winning the half.

Oh yes, I will be there for sure the next year!
The finishing time and 50 of 120 are very good numbers.

Good to see you had a good run in the CT 5km today. Well done. What's next??

Sounds like a great race! I love using races as long runs. Makes them so much more fun!

It must be a gorgeous time of year down there for running! The trail hot looks very inviting. I've never ran a race with fence styles before!! The combo of terrains Makes Sarah-Jayne's time very impressive! Sounds like a fun course.

Liz, thanks. I'll write that one up. Blackmores Half is next as a training run.

Karla, agree with that. Long races as all-out races often don't end up being much fun at all!

Raina, it's beautiful temperature wise, but the pollen is giving me trouble. I think Sarah-Jayne would have run 1:26-7 on a road course. She's in good form.

It is Aki. Give it priority when you're sorting out your race schedule for 2014.

Congrats on the race, Ewen! Sounds like a blast of a day in every way.