An unpredictable half marathon

Canute blogged recently about his many months of preparation for the Robin Hood Half, in which he was originally targeting a time of 100 minutes. Although his aerobic fitness is better than at any time in recent years he's been finding it hard to complete the race-specific training. Key sessions were to be long runs with the last 5k run at half marathon goal race-pace (4:44 per km). He's been finding it difficult to maintain paces of 5 mins/km for any appreciable distance. I haven't done anything like that in training so can I be confident of running under 101 minutes? 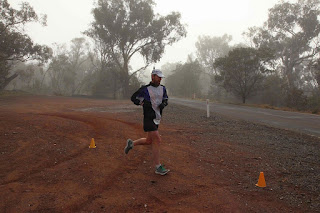 Melbourne had better be warmer than the Bush Capital 16k!
Posted by Ewen at 8:36 pm

Good luck to you, Ewen, that's going to here in an eyeblink, but you've been training and racing well so I predict a great unpredictable race. And McMillan says you'll be 4 seconds under your PB, can't argue with that. :) I'm looking forward to reading of your successful outcome.

I find McMillan very accurate up to and including the half-marathon distance. Generally the best training for HMPs are tempo runs; you're doing that, which is good, but the odd long run would not go amiss. You can still squeeze one in before the race.

Good luck! I hope the training and the race go well.

Good luck, Ewen. You'll be fine - AND you are always faster than me!

Thanks Flo - I predict success for your prediction of an unpredictable great race ;)

Thomas, yes, have taken that on board. Last long run will be this Sunday. Usually we run long Saturday but rare Irish-style rain is forecast for Saturday morning.

Susan, don't know about that. Being a champion sprinter you'd give me a good thrashing in anything up to 400 metres.

There's no point in over analysing it. Just get out there and enjoy your run! That's what it is all about after all (especially at your age ;-) ).

Once again, there is nothing I really want to add Ewen about you and Runner Susan and thrashings.

If McMillan say it then it's achievable, provided you put in the correct training. I'd say it'll be your racing endurance that will be the most challenging, given that all your racing has been at shorter distances. I thought that any session done within a 10 day period before a race generally has no benefit on race day. All the best and looking forward to hearing all about it.

J, like you I have the OCD overanalysing gene ;) And as a bloke pushin' 60 I always enjoy every moment.

Grellan, that's what worries me a tad - my training hasn't gone exactly how I'd have liked. I think (particularly for a low mileage runner) a training session that close to a race can have an effect. Traditionally for a marathoner it would be a sharpening-type race over 5 or 10k. For myself it's for the confidence I'd gain in being able to run 'fast' for 3/4 of the race distance.

Just run the Melb Half Marathon alongside me and we can try for 1.40 together :)

The strength is there, its just the speed endurance that is questionable. However you have decades of experience and should be able to easily rise to the occasion. Intervals, hills, fast finishing tempo runs, anything that gets the leg speed up, and maybe the heart rate up, and tunes up the speed endurance a bit will help buy you a few minutes on raceday in my opinion.

I'm in a similiar boat, totally into the analysing obsession mode now with 2 weeks to go.

The 15k attack the week before sounds like a brilliant idea, and it was a good predictor in the past so hopefully it will be again. I'm trying to do something similiar with the marathon, did a 25k attack last weekend, and hoping for some 12k attacking efforts in the last 14 days or so just to try and get my brain and body used to holding something similiar to racing pace for about an hour...although I am pretty confident in the excitement of the race years of racing experience woudl kick in anyhow, but it gives you psychological confidence going into it if you know you are primed for racing. Mcmillan is handy, and most of all try to avoid or manage injury and illness they are the biggest obstacles on raceday, not whether you have done enough tuneups in the last 2 weeks, although I still think you can pinch a few extra minutes with good tuneups in the last 2 weeks...

Hopefully the weather is not hailstorms like for the AFL GF..., but heatwave wouldn't be good either... The bush capital race looks like good fun.

You are approaching Melbourne HM with the opposite training background to me. I needed to get the fatigue out of my legs and put a little bit of speed in. I am pleased with how that has worked out so far, but the proof of the pudding will be determined tomorrow.

I think a moderate paced 15 K a week out from the event is a reasonable plan for you, partly to build confidence, but I also think that you can get a fitness benefit from such a session within the final two weeks provided you minimise the risk of harm. Apart from outright injury, the two potential problems are microtrauma and glycogen depletion, but neither of these should be serious with a moderate paced 15K. You can easily make good any glycogen depletion. While I am not a great fan of static stretching, I do think that light stretching after training helps smooth out any local spasms. As Pete Magill would say: the goal is loosening, not stretching the muscle.

Like some of the other commenters have said, I've found McMillan to be eerily accurate if you're training right, and it certainly sounds like you are. Good luck! I'll look forward to hearing how it goes!

Thanks Liz - might try that, but don't get angry if you chat all the way and I only reply with gasps and grunts ;)

Jonathon, yes, I'm a bit like you in using experience and 'rising to the occasion' on the day to deliver a good race. Sounds like you're going well with the various tune-ups. Hope to catch on Sunday arvo at the G.

Canute, I'll be very interested to see how you go (and how your legs fair) tonight. Probably be Monday arvo before I get to check your blog. Had a few niggles at the end of today's long run so I'll try and keep the muscles loose with light stretching. Thanks for that tip.

Thanks Karla. Nice going with your 'On the Run' show too - great viewing!

Dear Ewen,
If you believe it then you can do it!
Life is what you make it.
And for sure you can run an amazing HALF MARATHON!
just GO OUT AND GET IT!
It's as simply as that, how much do you really want it?

Yes! That race will be interesting, hope you can run it as well as your recent 10K! Excellent photo of you running in the bush too, BTW!

Rick, I know I can count on you for a pep talk! You should take up coaching ;-)

If so, you'll read about it here Bob.

Scott, yes if I can do that it'll be a good one. You mean I'm almost as photogenic as you were in that photo you posted on Twitter with those two young Japanese ladies?

Don't believe Mcmillan Ewen. I ran the sub 3hr marathon without doing a 10k that year. Of course a sub 4min k half 3 weeks before did help.

I think that only you can understand what is better to do to reach your goal. You have the right experience and you know how you feel.
Sorry for the Wallabies but it difficult to play against SA without 9 players (all injured). Now we will see what Italy will be able to do but I don't have any hope because as usual we don't have a kicker.

Stefano, I think you should offer your services to Italy as kicker! And to Australia as coach ;)