An email from Colin

I'm sitting here feeling a bit battered and bruised, licking my wounds while thinking about what was a fantastic weekend in the Blue Mountains. It started last Monday with an email from Colin Jeftha, Race Director of the Six Foot Track Marathon, offering ten guaranteed last-minute entries. There had been late withdrawals from the race and the committee wanted the event to start with "as close to the 850 race limit as possible." In a sliding doors moment of impetuousness I pulled out the credit card and entered.

My taper wasn't that scientific! I jogged shorter and easier with the Wednesday group, then had two days of no running. This didn't work! My legs felt ominously sore during the first slippery downhill 300 metres of the race. Once at the bottom of the Nellies Glen steps I continued to run easily hoping the legs would come good. They didn't. My official split at the Cox's River was 1:51:21, about 9 minutes slower than last year. I knew then it would be a long day!

From the Pluviometer (26k in 3:46:08) to the finish at Caves House there was much more walking than jogging. 2 hours 50 minutes is a long time to cover 19 kilometres! I was extremely happy when Finisher's Medal #7 was hung around my neck by a smiling volunteer after a 45 kilometre adventure. 749th place (out of 806 finishers) in 6:40:05. I'm not sure this over-distance run will have a positive effect on my 5000m race on 25 March, but right now I'm not too worried. It was a fun weekend. 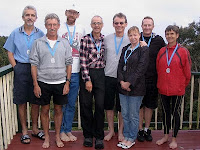 Heroic effort Ewen. I am in awe. Wow!

No mean effort to get yourself up mentally (and physically) on short notice.

You'll no doubt savour this medal a bit more than some others I guess.

Massive effort to finish, well done and to be so far in front of the sweepers.

Well done Ewen and so exciting to have achieved yet another 6Ft in spite of the short notice. You are amazing - huge congratulations! :)

Well done on such short notice! Nice bling...enjoy your recovery...

You crazy guy!! :-) Only in the best way possible, of course. I'm so impressed with your last minute decision and crazy weekend. If there was a bowing emoticon, I'd stick it right here X.

Ewen, to have tired legs after 3 easy days does not sound good, you often seem to be not racing or feeling as good as you want, maybe you have a low blood iron count, have you had it checked of late?
congrats on finish the very tough race.

Christ! Nothing like a spur of the moment ultra to get you all fired up about doing a mara.

which features two races on your calendar, including six foot (I can see why you signed up with less that a week to go). I'm doing the Irish one next Sunday.

Wow Ewen, That is really something. I can't believe you actually....

"pulled out your credit card".

I bet that baby hasn't see the light of day in a while!

That is a tremendous effort. Well done.

Seeing that track through the gum trees creates a little tug of nostalgia. I think the chance to run such a race is worth suffering 7 hours of sluggish legs - but that thought doesn't diminish my admiration for your effort

The effort should bode well for your upcoming Christchurch marathon.

Fantastic effort Ewen. At least you have a good base now for your Christchurch marathon. Not sure about your track race though.

Fantastic news that you got to be there again...Hoping I might be there some time in the coming years. well done on having the intestinal fortitude to get out there at the last minute. 7 finishes is outstanding, may there be many more!, some are harder won than others The people Ive run with did 5.53, 6.11 and 6.16, so not that far ahead of you at all. One of them (she was in the 6 hour race the other weekend) had a DNF unfortunately. Thanks for the tip re dehydration consequences too.
Thanks for the pictures too.

Fantastic news, and excellent effort, great to hear you had a memorable day.

TA and the Gnome said...

You might be surprised about the effect it'll have on your upcoming race. I rode to work today, and I found that I was actually riding more strongly and with better aerobic condition than I have for ages. Give it a shot and see what happens. :-)

The English Daily Telegraph has put up a list of the world's best running races, and your Six Foot made the list.

Incidentally, I'm going to run the number 10 on that list on Sunday.

Still, most of those races wouldn't make my own top 10, but that's the way those lists always go.

Very cool. I love the idea of an impromptu marathon. And, like I saw elsewhere in the comments, I have a feeling this will help more than hurt in your upcoming 5K. Or, at least, I've always had good luck with racing right after a marathon. It just seems easier after putting in such an intense effort.

Good thing you got a couple of 30k runs in there over the past little while. Did you have an inkling or just like to be in marathon shape for spur of the moment decisions? I'm impressed!

Paul, thanks. You're right - it was the hardest earned medal of all my Six Foots.

Steve, the thought of being caught by the sweepers had me plodding scared!

Strewth, amazingly stupid would be closer to the mark!

Thanks Bron. The recovery is going slowly!

Thanks Flo. In Scott Brown style I'd bow right back.

Rick, I haven't had the blood checked for a while. I'm hoping being sore from the start was just the cumulative effects of a 'reverse taper' (30k Saturday) and doing a silly hard 5k race Tuesday.

Grellan, a regular marathon should be easy after 6'! Thanks for the link. I'd rate 6' and City to Surf as definites in that list. Good luck in Ballycotton!

That's right Scott. I had to blow the dust off it to read the numbers.

Canute thanks. Nostalgia is the main reason I entered. Even though I only live 350ks away I'm always nostalgic for Six Foot and the magnificent bush scenery, smells and sounds that are synonymous with the race.

Sling, thanks. I'm hoping it'll help for Christchurch physically. Mentally I'm not so sure.

Jonathon, you'll have to get there one day. You'd enjoy the experience.

Bruce, that's great! I'll be giving it a shot. Great to catch up with you on the weekend (and have you not catch me ;)

Thomas, that's cool. In my unbiased opinion it is one of the best races in the world. Definitely the best trail race in Australia. Agree it's "not for the faint hearted", even though they show one of the only flat sections in the whole 45k in that photo! Not sure 80k west of Sydney counts as "outback", but it's definitely rugged!

Robert, at least with an impromptu marathon there's little time to get nervous about it. Good to know you've done well soon after marathons. Hope my legs agree!

Mike, no inkling until the email Monday. I was going up as a spectator anyway, so a snap decision to race. The 30k runs have been to see if I'd like marathon training. Wouldn't have done that last one if I'd known I was running Six Foot!

Thanks Rinus. Next time I'm going to do some hill training and run faster!

I've withdrawn from the 5k tomorrow night. I still haven't recovered from 45k of mountains and deep rivers.

Congrats, Ewen! I need to take some trail running and credit card restraint lessons from you!

I don't know what was more fun to read.. the post about Six Foot or the roasting you got in the comment section. Seriously, great performance on such short notice as it sounds like this was quite a challenging course.

Thanks Susan. I can teach you the quickest way across rivers in trail races. Having Scottish ancestry helps with the credit card ;)

Thanks Bill. I roast back as good as I get, so watch out! It's about the toughest "marathon" course around - 1 to 2 hours slower than a road marathon. I missed the 5000 as I'm still tired! There are some 3000m race opportunities over winter which I'm looking forward to.

Well done Ewen. I hope you recovered well and that the 5K on the 25th went OK.