I raced 6k with the ACT Cross Country Club this afternoon. I didn't run that well! The race used the "old" Jogalong course in Stromlo Forest. It's a slightly slower course than the "original old" Jogalong course, due to the fact that the last kilometre of the race is uphill, whereas it used to be downhill.

As a race, it was good and bad. I felt I was running well during the first 3k, and actually closed to within 10 seconds of my habitually fast-starting rival Jim (who would finish just over a minute ahead). I was thinking 'gee, I'm going to catch him today!' before the wheels promptly fell off as I hit the rutted uphill bit. From then on it was a struggle. A woman in black passed me, as did Andrew G, and during the last long uphill kilometre, Burkie. Heidi would have been next, but thankfully the finish-line arrived in the nick of time.

I'm not enjoying racing tired. Two weeks ago my race at North Lyneham was pretty uninspiring. As for training, yesterday was another 7k + 10k Hosaka double. Now these training days have been going well! I'm enjoying them — even in the 2 degree temperatures we've had recently. I just about have the repeatable balance right. Not quite Zen days, as Scott suggests they should be, but getting close. Tomorrow will see another 120k for the week under the Frees/Asics, for a 4-week total of 480 kilometres. I'm thinking about racing the Canada Day 5k next Sunday, but with a week of easier running first! I'd like to feel fresh for a change. 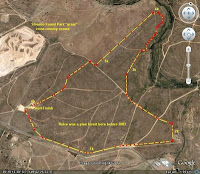 Follow the yellow dirt road!
Posted by Ewen at 7:22 pm

yep! fresh legs are good..i LOVE the week leading up to a race! 2 cool!

TA and the Gnome said...

Solid training - good.
Resting before a race - even better!
:-)

Setting goal races to train for and doing well in them, while using other races as tempo or speed training sessions, can be a useful strategy. Just have to keep a clear head on which ones are which! Some of us obsessives are not so good at the latter.

Good to have a report so soon after the race.

And the full results are also on the website.

Many races these days have course changes. It's good that everybody copes.

"Frees" means Nike Frees? How do you like them? Which ones are you using?

You can't train hard and race well at the same time!

As R2R said I think its time to add in a tempo run and a session of short sprints on grass to improve leg speed!
And yes a cut back in miles and a bit of sharpening work should let you race a fair bit faster!
Good luck next week!

Almost time to lift the lid on that petri dish to see how this training is working for you, but yes, rest up a little before that 5K race.

I don't like doing anything tired. And such is my life lately. Your six k beats my five k. That should make you feel a little better.

Yes Bob, the Nike Frees. They're my favourite shoe of all-time (I've had a lot of shoes!). The 5.0 version. I'm still using my original pair - they last forever, and in fact feel more like barefoot running the older they get. I also have two newer pairs. They're great for training, racing on the track, and road up to 15k.

Adrian, sometimes I do my 7k run at tempo effort - I am missing some long intervals though, and the leg-speed sprints Rick mentions. I wanted to get 'comfortable' with the 120k weeks before bringing those in.

Scott, I'm worried there could be some pretty ugly fungus in that petri dish!

Not a bad race time and the past is a differend time!.
A lot of km trainings week, and goodluck.
Rinus.
www.rinusrunning.punt.nl

Ewen, I have been thinking about why it was difficult for you to push your HR above about 90% in the recent race. The argument is a bit technical but I have tried to put it clearly on my own blog.

At a practical level, it is very likely you would enjoy your races a bit more at present if you varied your training, but it is for you to decide what your current goals are. Whatever your goals, be cautious about over training

I honestly think that is a wonderful result considering the huge number of kilometers you have been running. I am wondering what I will be doing in my early 50s and am quite sure I won't be doing anything like you.

I also think it is a difficult thing for someone who has run such great times as a 32 year old "youngster". You are still fast Ewen by any stretch of the imagination.

Best of luck with everything and don't forget to allow that body to recover from all the hard work.

Thank you for the birthday wishes. I really appreciate that! Have a great week!

Who designs a course with the last km uphill ... that's just not nice.

Well done on the race!

I totally agree. Why do we meet on the tops of hills? Downhill starts and uphill finishes are awful. Reverse the practice, I say, meet in valleys, start up hill, and finish down hill.